A misty start to the day compounded by misted canopies, the sun poked its head out of the clouds around 10:30 and after a bit of manoeuvring to ensure the sun reached all parts the canopies flying commenced at just before 11 am. Despite reservations regarding the mist returning ( which it did not) flying continued, last launch was at 16:10 and everything away by 17:00.

After a band of rain passed over the airfield we were left in a moist airstream but no further precipitation. Wind 15 to 25 knots straight down runway 21 and surprisingly smooth. Fran took the prestigeous place of being the first launch of 2022 at Aston Down, flying the K23. Cloudbase was only 900 feet to start with, but by the mid afternoon we were launching to full height. In all 25 flights were done including a couple of Grob take-offs. An enjoyable first day of the year and great to be out in the fresh air.

A hardy bunch arrived and got the gliders out. Unfortunately the North West wind was dead between the two runways and above the crosswind limit on both. After waiting until lunchtime with no improvement looking likely, the hardy bunch put the gliders away again. In the meantime they had made themselves useful by rigging the K18 and derigging a K21 for a little attention in the workshop.

A much calmer day after storm Arwen passed by. Wind only about 10 knots from NW but enough to need laying off to the left on launches. Colder than of late so everyone was wrapped up warm. We got off to a slow start due to a water leak on the winch but once up and running had an enthusiastic cohort of UWE students and club members to fly. One notable flight was the K23 which took an aerotow to 3000’ to do some aerobatics but still managed an extended flight after finding some “good air” on the way down.

Once the afternoon arrived, so did more cloud cover and by 2:30 we had 8/8ths which quite suddenly came down to less than 1000 feet. The last aerotow was aborted at 700 and the K13 did a land ahead “launch failure” (actually they were chopped for not drift correcting). Last 2 launches of the day were into light drizzle to just 900 feet for hangar landings. Your scribe drove home through a mini blizzard at the Air Balloon!

An excellent training day with a good turnout. The moderate N wind was nearly straight down the run. Although the winch run was shortened before we started, a gradual increase in wind speed during the day was enabling launches in the DG500 nearly to 2000 ft at the end.
In view of the recent scare, everybody wore masks when flying dual. The start was delayed by the bus refusing to start, eventually solved with a piece of wire by that master of all trades - our CFI. The day came to a slightly premature end when the cable retrieve truck decided it had done enough for one day, refused to continue its journey back to the winch and couldn't be restarted.
The Eurofox agent demonstrated his latest 140 HP offering, causing amazement among the heavy brigade by towing their two-seaters to altitude in record time. Methinks It would leave very little time on tow for beginners to learn much, however.

Sunday the 14th - not quite such a good day.

The winch was out early thanks to Martin and Graham and contrary to the forecast the sky was clear and bright. We were all ready for the mile high aerotow but as we got the kit out, the sky clouded over from the east. The first winch launch was to 1500' above the low wisps, the second to 900', followed by a couple of low launches to get the gliders back to the hangar and that unfortunately was it for the day.

Firstly, a big thank you to our winch drivers Adrian Giles Johns Sadler and Paul Roberts. Thanks to their efforts we had,,what was for mid November, an excellent day's flying. UWE students Jah and Lin had their first ever glider flights - I think they enjoyed the experience. Diane and Domenika (spelling?) also acquitted themselves well. Tim Andrews demonstrated he could fly with out an altimeter and Adam Mayo gave an excellent demonstration of how to handle a simulated launch failure on the cross runway. Darren Edge took yours truly up for two aerobatic flights - five hours later and I still don't know which way is up. Thanks to instructors Ben Hilsenrath and Geoff Dixon for helping out and to Jonathan Apperley for the aerotows. It would have been nice if the wind could have made up its mind which runway it wanted to blow down, otherwise a good time was had by all. 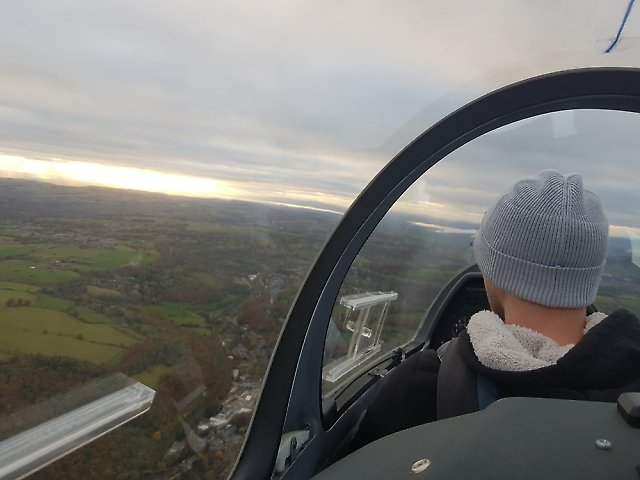 The day greeted us bright and sunny with a moderate westerly which made runway selection very easy. Tom and Austin were tempted by the Nympsfield ridge and John Mac went wave hunting in Wales. UWE are still providing new students for us to fly for the first time, they are having a busy year! As there were no winch drivers available, we operated completely on aerotow with Adrian having a surprisingly busy day including collecting Tom and Austin from Nympsfield after their fun. Three trial lessons and a few club members completed the list and everyone had flown by 3.00pm.
Thank you everyone for turning up and helping to keep everything running smoothly.

Yesterday started with a lot of low cloud which cleared early morning to give a bright day with broken cloud and a couple of showers in the afternoon. Robin and I were the only instructors on duty to look after two ODCs, a group of students and Tim Andrews. Unfortunately, we were delayed by a minor incident with the bus which meant we didn't start launching until about 11:45. Consequently, with Robin looking after the ODCs, I flew with the students and Tim, but I decided that two flights each would be sensible to start with given the limited time available. This worked well with Luca and Alvin having their first flights and Dacy getting to grips with using the ailerons. Teddy, a near-Bronze student from Wormingford, had a couple of check flights and then flew the K-23 for the first time; unfortunately, a steamed up canopy and reducing light prevented a second. I finished off with three flights with Tim before we packed everything away as darkness descended! I think the day worked very well because the students got stuck in and helped run the launch point as well as they could. Thanks also to Martin Hayward for driving the winch in the morning and Stuart Thackeray for taking over in the afternoon. Last, but not least, thanks to Joe for helping the students with ground activities and keeping the log LEGIBLY, assisted by Tim. Another long, tiring, but rewarding day.

A brilliant autumn day with great visibility and even a few thermals appearing later in the day. With the first launch just after 10am, we managed to get everyone flown by 5pm with 34 launches in the day. Three new members flew as well as a few returning UWE students, Tim Bralesford completed some more instructor training, and Ben introduced 6 new people to our wonderful sport. A big thanks to Mike and Richard for driving the winch, and to Ben and Jonathan for looking after the trial lessons.